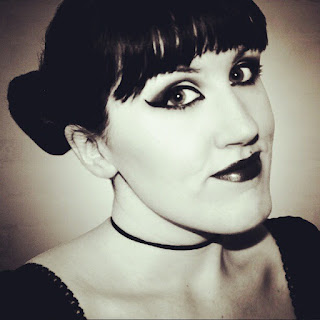 One of the great writers I discovered last year was Miss Icy Sedgwick. She wrote a terrific Western called GUNS OF RETRIBUTION that was beautifully-written, full of memorable characters, and action-packed.

That was a year ago now. I'm happy to welcome Icy to Psycho Noir to talk about this terrific novel on its one-year anniversary.

The Western is one of those truly iconic genres that seems to continually deliver the goods. No matter how many films we see, or stories we read, it seems fans of the Western will always appreciate the wide open skies, the struggle between civilisation and nature, and the human dramas played out among the tumbleweeds and silver mines. The success of the True Grit remake in 2010 and even video games like Red Dead Redemption prove there is still an audience for the Western, but as Cowboys and Aliens tried to demonstrate, the Western is a genre that oddly plays very well with others. Horror Westerns, romantic Westerns, even steampunk Westerns - done properly, the genre-straddling stories are brilliant. 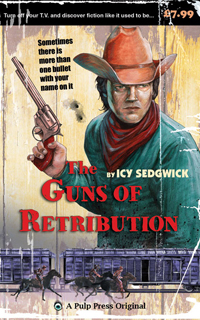 I wrote The Guns of Retribution as a pulp Western. I wanted all of the trappings that go along with a Western - but I wanted a pulp/noir femme fatale, a sheriff so crooked he wouldn’t know what ‘straight’ meant if it jumped up and bit him, and all of the challenges heaped upon the hero that make pulp such an exciting read. Bounty hunter Grey O'Donnell doesn't find things at all easy, and every time he thinks things are working out, something else hits him with a curveball and he’s forced to react. In particular, I followed Lester Dent's four-part pulp plot, that sees the hero continually swatted with trouble, wrapped up in suspense and menace. I didn't necessarily want to provide conflict for the sake of conflict, but rather as a means for Grey to prove himself as a hero - not to himself, but to the reader. Grey will always be a hero to me - but he needs to be a hero to you, too, and the only way for him to do that is to act like one.

I think part of the attraction of pulp is its accessibility. It's always been intended to be accessible - printed on extremely cheap paper (and written by underpaid writers), the pulp magazines of the 1930s and 1940s might contain several stories, yet only cost around 10c (around $1.60 today). If you couldn't afford the more expensive magazines, you could probably afford a pulp title, and the stories would focus on high adventure and escapism – exactly what you’d need in the years following the Depression and the Second World War. The magazines, and their stories, were intended as mass entertainment - and that's exactly the attitude I had towards The Guns of Retribution. I wasn’t aiming for highbrow art or literary fiction – I just wanted people to read and enjoy the story, and to spend a few hours in Retribution and its surroundings.

Pulp Press' tagline is "Turn off the TV and discover fiction like it used to be" and I think that's such a healthy attitude to take. Sure, these pulp stories aren't high literature but they're getting people reading, and using your imagination to picture the scene as a bounty hunter and his associates attempt to board a speeding train is far more productive than watching a Z-list celebrity act like a moron towards a bunch of other Z-list celebrities in a fake 'house'.

The Guns of Retribution came out in Kindle format a year ago, and in that time, I've had people who "wouldn't normally read a Western" give it a go, and love it. If anything, I hope that it encourages these readers to try other pulp novels, and more Westerns, because if the quality of genre stories coming out this year is anything to go by, then there's life in this old dog yet.

Bio – Icy Sedgwick was born in the North East of England, and is based in Newcastle upon Tyne. She has been writing with a view to doing so professionally for over ten years, and has had several stories included in anthologies, including Short Stack and Eighty-Nine. She teaches graphic design and spends her non-writing time working on a PhD in Film Studies. Icy had her first book, a Western named The Guns of Retribution, published through Pulp Press in September 2011.