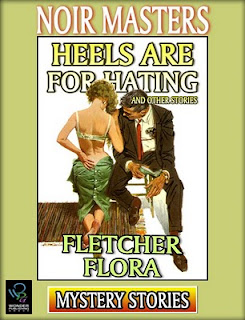 Fletcher Flora is waaaay overdue to be rediscovered by some small publisher, don't you think? His work is hard to come by.
He has a story in the old Black Lizard Anthology of Crime Fiction, and his novel Park Avenue Tramp was published in an omnibus by Stark House a couple years ago. And the story "Heels Are For Hating" is available as a Kindle download... and that's it. There's nada else.
I knew him only from a couple of old, falling-apart Alfred Hitchcock story collections, and in each of those Flora's stories really stood out for me. He was dark and funny and clever, one of those old-school "twist at the end" writers like Bloch or Dahl.
Come on, small publishers. Someone, anyone, get the rights to a whole bunch of Flora stories and put 'em out! I promise, I'll buy it.
Posted by Heath Lowrance at 9:03 AM 8 comments:

The Most Natural Thing in the World 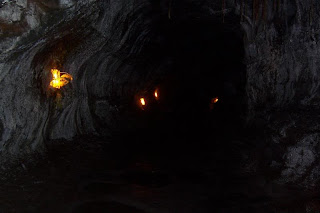 Can I go off-topic for a moment here?
I just read about a teacher union-funded attack on a candidate for governor in Alabama because he supports evolution. Said candidate backpedalled pretty quickly and came out in support of teaching creationism in schools.
What the fuck, people.
This has nothing to do with believing in God or not believing in God. The "evolution vs. creationism" thing is a manufactured debate-- it's not real. There IS NO debate. Evolution is a fact. Creationism as a concept exists solely as a political/religious agenda. I know many Christians who understand this.
So why does this lie continue to gain momentum in America? Why does religious faith have to be incompatible with reality?
As a father, the idea that schools might teach my daughter that creationism is a viable theory just drives me nuts. And the fact that the media attack on this candidate was funded by TEACHERS is sickening. Even more sickening is his response.

Okay. Just had to get that off my chest.
Posted by Heath Lowrance at 6:29 AM 1 comment: 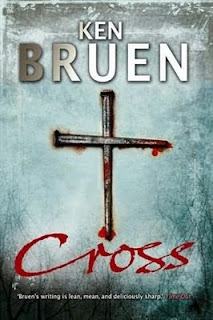 I’ve spent the last few months doing a sort of survey of modern noir fiction. My knowledge of the genre was pretty much confined to the “old school” stuff until then, books and writers from the 20’s to the early ‘60’s, and I had almost no inkling of the scope and diversity of the new breed. I stumbled into it, really, with a Hard Case Crime book by Jason Starr, and from there I did the research and sought out other writers. Made a few on-line friends in the process as well. Over all, the whole experience has been fantastic.
All told, I sampled about twenty writers working in the field right now. Some of them were duds, but most of them-- surprisingly-- were well-worth reading and a few were even brilliant. Based on this crash course in modern noir, here are some of the modern writers that really blew me away:
Jason Starr. Nothing Personal, Fake I.D., and Hard Feelings all reveal a writer who understands his setting and his characters deeply. He makes me think of some strange inter-breeding of Jim Thompson and Brett Easton Ellis.
Megan Abbott. Queenpin, Bury Me Deep, and Die A Little. Abbott is a serious writer with a gorgeous voice that recalls Cornell Woolrich and David Goodis.
Christa Faust. Money Shot is funny, fast and tight, with great sympathetic characters and an attitude that makes me think of the paperback originals of the fifties.
Duane Swiercynski. Severance Package is high-octane, high concept fun. While not strictly noir, it's got noir elements and redefines how beautifully over the top an action story can be.
Charlie Huston. The Mystic Arts of Erasing All Signs of Death. Completely modern in his sensibilities, Huston gives us characters who say what we wish we could say, and is a master at upping the ante at every available opportunity. He's also got a wicked sense of humor.
Alan Guthrie. Slammer, Two-Way Split, and Savage Night all rocked my world; Slammer especially impressed me with its nerve-wracking tension and ever-increasing sense of doom and madness. Guthrie just seems to get better and better with every book.
Ken Bruen. The Guards, The Dramatist, Priest, and Sanctuary were a revelation. Bruen puts his characters throught the grist without mercy or sentiment, manages to be blackly funny at the same time, and each book leaves you emotionally drained.
Guthrie and Bruen, in particular, absolutely devastated me and made me realize I’d better up my game a bit. I’m not sure what they’re drinking in Scotland, but it’s clearly something with a healthy measure of angst and tension. My estimation: they are the two best writers of noir currently active.
All of the mentioned writers, however, are ones that I intend to follow actively. Each one of them makes me realize that we are, indeed, living in the third Golden Age of Noir.
Posted by Heath Lowrance at 3:32 PM 2 comments: 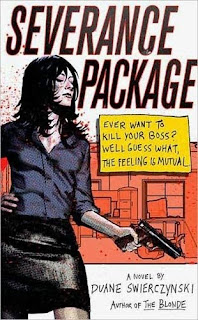 Jamie DeBroux, along with the rest of the office staff, are called in for a special Saturday morning meeting, only to have the boss announce that their company is a cover for a secret intelligence organization that’s being shut down. And that means no one leaves the office alive—either drink the poisoned mimosa or get a bullet in the skull.

That premise kicks off the wildly frenetic Severance Package, a high-concept noir/espionage hybrid that is basically one long action scene. The central character, Jamie, is a normal guy with absolutely no idea about his connections to the shady underworld of espionage, but everyone else in the office—to one degree or another—is a trained agent. When all hell breaks loose, the office becomes a stalking ground of skilled agents pitted against each other, with befuddled Jamie caught in the middle.

I hate to use a worn-out cliché like “couldn’t put it down”, but… that’s the truth of it. Swierczynski has a really engaging, full-on style, only a little tongue-in-cheek, that’s simple and direct and focused tightly on story. Recommended.
Posted by Heath Lowrance at 6:39 AM No comments:

From Here to Oblivion 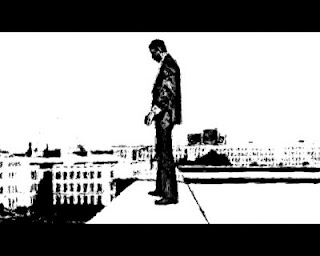 There's a reason I love Ken Bruen's work. He's absolutely brutal, emotionally draining, and never lacking for real insight into human misery. In "Priest", he unflinchingly explores the psyche of a man on the very precipice.

Still reeling from the shattering events of “The Dramatist”, Jack Taylor is back in Galway, trying to stay sober, trying to get a handle on his rage and despair. He’s asked to investigate the horrifying decapitation of a priest, and the investigation takes his already fragile psyche through an emotional wasteland of abuse, guilt, and vengeance.

Bruen is never afraid to ask the difficult questions in his books; what makes each Jack Taylor story so emotionally grueling is that he’s also not afraid to admit there are no easy answers to human suffering. While Jack may be the author of his own misery, even when he works to get his world back in order fate has a way of pulling the rug out from under him. Jack is aging, and it seems all his roosters are coming home to roost. Rarely have I felt such sympathy for a protagonist.
Posted by Heath Lowrance at 2:05 PM No comments: