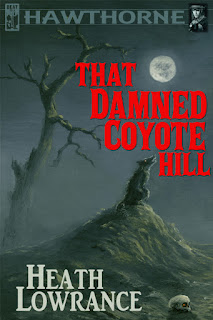 It's called "re-branding", I reckon. So here's the brand new cover for the first Hawthorne tale, "That Damned Coyote Hill". Keepin' it fresh and all that. Since Beat to a Pulp Press picked up the Hawthorne stories (after the original publisher and I went our separate ways), we've experimented with a handful of different looks for the covers. They're all unified now by the font and logo running along the top, but each cover is unique.

When I first submitted this story to the original publisher, I was staggered by how quickly he came back with a cover for it-- and an eye-catching cover it was. I was well-pleased... until a handful of friends contacted me almost immediately to inform me that the image was from the Dark Tower series by none other than Stephen fucking King. 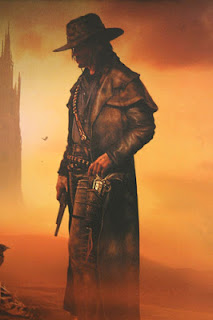 I ignored the warning bells and contacted the publisher to let him know I'd try to find my own cover art. That's where my good friend Ron Warren came in; he whipped together a terrific image, using his own work, in a sort of matted thing that looked terrific. It served me well for a while, and I still quite like it. 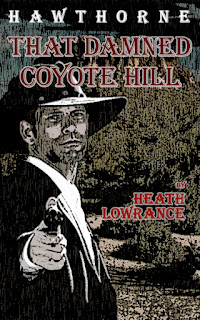 When my relationship with the publisher ended, and Beat to a Pulp stepped up, we kept the original image, since it was owned by Ron and there would be no legal hassle. Again, it did well.

But when "The Long Black Train" and "The Spider Tribe" came out, David Cranmer and I knew we'd need a fresh look, and something to tie all three stories together. Hence the new logo, and the new cover art.

In future Hawthorne tales (and there are more coming!), you'll see the same logo along the top every time, but the cover images themselves will continue to be quite different from one another. As usual, your input is welcome.
Posted by Heath Lowrance at 4:36 PM 8 comments: