You guys are gonna hate me a little bit for this, but honestly I didn't read a lot of new stuff this year. It was a year of going back to my reading roots, cramming old paperback originals from the '50's into my head, some old school Matheson and John Collier, and a bunch of Alfred Hitchcock anthologies. Some books by writers I really admire are still waiting to be read as I continue to try and scratch the itch for old stuff.

My point is, there's no doubt lots of brilliant stuff I missed this year. But there are TWO I didn't miss, two stunningly good novels by stunningly good writers that even months later have stayed with me. They are my two picks for best novels of the year:

THE RAPIST, by Les Edgerton

Forget "hard-boiled", forget "noir", forget everything you think you know about what a genre story is supposed to be. THE RAPIST brushes all of that aside with a disdainful sneer and instead presents something that aspires to far more than any single genre can provide. More than anything else, this novel occupies the same uneasy space that Dostoevsky's "Notes from Underground" rests in-- a controlled testament of misanthropy and delusion. But whereas the great Russian's protagonist was fueled by rage, Edgerton's narrator is fueled by a sharp, ugly narcissism, and a beastly inhuman nature that peeks like a stalker through his eloquent language and high-minded ideas. Not so much a plot-driven novel as a narrative, Edgerton guides us into the mind of his narrator and leaves us there alone to fend for ourselves and make our own way back from the darkness. How much of what Truman says can we dismiss as the ravings of a damaged mind? And how much must we stop and listen to, hunting for a glimmer of truth?
THE RAPIST is a challenging novel, not for the squeamish, and definitely not for anyone who dis-likes being pulled out of their comfort zone. It quite simply blew me away. Destined to be a classic.

CORROSION, by Jon Bassoff, is a well-done psycho-noir. No, it's more than that-- it's a bit of a masterpiece, really, probably the best I've read since Allan Guthrie's SLAMMER. It's devious and disturbing, with an underlying sense of dread that keeps your guts in an uproar and absolutely refuses to let you stop reading.
Bassoff tells a sort of a duel story here, first with the horribly disfigured Joseph Downs, an obviously disturbed veteran of the war in Iraq. Joseph gets involved with the wrong woman (a tried-and-true standard starting point for noir stories) and it inevitably leads to violence and depravity. But Bassoff takes a left turn after that, subverting the old noir tropes and focusing on Joseph's fragile psyche after being betrayed.
The second part of CORROSION skips backwards a few years and tells the first-person story of Benton Faulks, a lonely, messed-up kid dealing with his dying mother, a father going slowly insane, and his insatiable lust (love?) for an older woman who wants nothing to do with him. Reading Benton's slow descent into a kind of madness that makes even his father look sane is hard; when Benton begins acting out his fantasies of being a sort of super-hero soldier, it's horrifying.
Some reviewers have compared his style and his themes to Flannery O'Connor, William Faulkner and Jim Thompson, and I suppose that's all true. But Bassoff has a style of his own, obsessions deeper and darker than those three brilliant influences would probably have dared to go.
Posted by Heath Lowrance at 12:34 PM 5 comments: 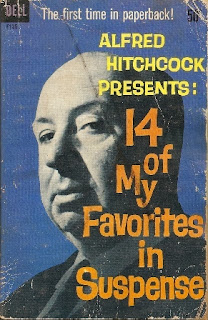 In the late '40's, when Alfred Hitchcock was fast becoming a household name in the U.S., he was contacted by Dell Publishing to collect some of his favorite suspense stories for a new anthology to be titled SUSPENSE: STORIES COLLECTED BY ALFRED HITCHCOCK. He did so, providing an introduction as well, and it did well enough that, over the next few years, Dell published five more of them.

For a few years after that, there was nothing, until the TV show "Alfred Hitchcock Presents" hit the airwaves. By that time, Hitch wasn't just a household name, he was a full-blown PRODUCT, a sure-fire commercial entity. Someone had the bright idea of reviving the Hitchcock anthologies, as a way to sort of tie in to the success of the TV show. Hitchcock himself, by that point, had nothing to do with the enterprise, but he gladly lent his name to it. A writer/editor named Robert Arthur did most of the story selection in those early days of the Hitchcock anthologies, even doing pitch-perfect Hitchcock impressions for the pithy introductions.

What followed, for the next 25 years or so, was about 70 anthologies, not counting the original six (some of which were eventually reprinted under different titles in the early and mid '60's) and not counting the ones that came out after Hitchcock's death in 1980 (the ones without cheesy titles but were annual or bi-annual numbered anthologies).

A very good publication history of the Hitchcock anthologies can be found at Casual Debris, which saves me the trouble of writing one myself. This history was one of my primary sources when reviewing the anthologies I own.

Oh yeah, that. That's the point I was getting to, in my unfocused way. I own about 20 of the Hitchcock anthologies, and have been reading my happy way through them for a couple of weeks now. I'm currently on my seventh one. Over the next few weeks (or however long it takes me to read them), I'll be posting reviews over at Goodreads. If you're interested, check in.
Posted by Heath Lowrance at 7:43 PM 2 comments: