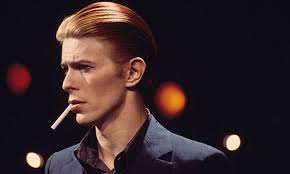 In the early 80s, MTV didn’t have a whole lot of videos in their catalogue, so if you had that station on for more than say six hours, you’d wind up seeing the same stuff over and over again. That’s really how I first came to be aware of David Bowie.

I mean, I knew who he was before that, sure. His early stuff was a staple of Detroit radio. You’d hear Ziggy Stardust all the time, and Rebel, Rebel, and Panic in Detroit. I liked all that stuff. But I wasn’t really… attached to it.

The David Bowie I saw on MTV, though… it was a different artist. One that really got right into my guts.

I still remember the first time I saw a Bowie video, and man, that’s saying something, considering the shit quality of my memory in general.  It was Fashion, from the 1980 album Scary Monsters (and Super Creeps), and I remember my brain going on the fritz for the duration of that song, my eyes glued to the TV, my stomach doing some weird fluttery shit I didn’t understand at the time.

The song, of course, was amazing, but it was more than that. It was this guy, this Bowie. He was so… odd. And so fascinating. He was beautiful. I’m as heterosexual as they come, honestly, but there was more than a little bit of a sexual response. In later years, it would become kind of a joke: would you have sex with a man? Naw, I don’t think so… unless it was David Bowie, har har har.

But he and his music came into my life at a sort of key juncture, a moment when I was changing into a young adult, on the verge of discovering who I really was. I was a weirdo and an outcast, a freak with a weird eye and zero confidence.

But here was this Bowie guy…he ALSO had a weird eye. But confidence? Damn. An IMMEASURABLE amount. He was clearly weird, and he clearly didn’t give a shit what you thought about that.

This was the same year I discovered punk rock, via my friend Lana, and all of this period of discovery that happened so fast and so intensely shaped who I would be for the rest of my life. I learned to embrace my outcast status and weirdness and it is no exaggeration to say it was because of David Bowie.

When a Bowie video would come on MTV, it didn’t matter what I was doing, everything came to a halt and I was completely committed to it. They played Fashion a lot, but also Ashes to Ashes, Look Back in Anger, I am a DJ, Heroes… he was one of only a few artists with an extensive video backlog, and so appeared frequently. 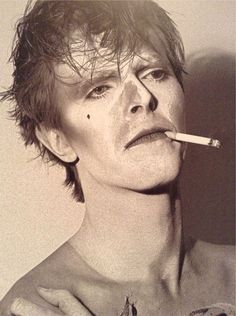 As I embraced the post-punk lifestyle with more and more enthusiasm, I bought my first Bowie album: Scary Monsters. It’s still probably my favorite. But eventually I possessed his entire discography, and realized that it was his late 70s stuff that really spoke to me. Beginning with Station to Station, then into his Berlin period, and ending with Scary Monsters. This was experimental, vital music from an artist at the top of his game, so moody and so smart, and so committed to a really singular artistic vision. Even at that young age, I recognized what David Bowie was—he was an artist with real integrity, a freak who didn’t care that he was a freak, and who had somehow made the world love him and embrace him for it.

I can’t even begin to tell you how inspirational that was to a young man like me, who wanted to hold on to who he was but who still desired love and acceptance.

And guess what? I followed Bowie’s example. And it worked. My late teen years, I was a different person. I embraced who I really was, I didn’t care anymore what anyone else thought, and because of it I gained friends…. And yes, girls. Mostly other weirdos, but you know… confident weirdos hold a great deal of appeal for the “normals” as well.

In that regard, David Bowie shaped who I would be for the rest of my life. More than any other artist.

In the late 80s, I spent a lot of time in Detroit’s various post-punk nightclubs and bars, doing my best to look and act like David Bowie. I experimented a bit with bi-sexuality, because I wanted to be open to new experiences… like Bowie.

Girls liked my weird eye. I heard many times: “Your eyes are beautiful…. Like David Bowie….”

And he would continue to be there, forever after.

When the album Let’s Dance came out, Bowie’s very deliberate (and highly successful!) attempt to reinvent himself as a pop star, I was on board. I knew what he was doing, as did most of his hardcore fans. He was playing yet another role. And even if we turned our noses up at radio friendly pop, we gave Bowie a pass, because it felt like an infiltration of the mainstream, an art spy in the ranks of our enemy. And besides, it was fucking GOOD pop music.

He masqueraded as a pop star for the bulk of the 80s, with varying results depending on the album, but by the 90s he had shrugged that persona off as being too artistically unfulfilling, and moved on to riskier sounds again. He probably outstayed the pop star thing, but I was all too willing to forgive him that.

In the years since, I’ve always been excited at the prospect of a new Bowie release. His personal re-inventions weren’t as extreme or easy to categorize in the 90s and 00s, but I’m sure that was deliberate. After playing so many roles in his lifetime, I’m sure he was happy to just express himself more directly, without couching it in a character.

I loaded up his last album, Blackstar, the day it came out. I didn’t listen to it that day, because I wanted to wait until I had the time to just sit and do nothing but listen, without distraction.

I made the time. 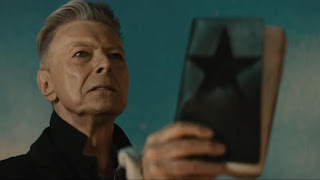 Blackstar, if you haven’t heard it yet, is… it’s haunting. It’s beautiful and mournful and even a little playful. It’s the best work he’s done since Scary Monsters, in my opinion. Is that assessment colored by the melancholy of his death? It’s possible. But so what.

I’ve listened to Blackstar four times now. In-between, I’ve been listening to older stuff, all my favorite Bowie tracks. I suspect I will be doing that for many days to come.

I cried when I heard the news that he had died. I have never in my entire life shed tears for the death of a famous person. But David Bowie was different. He was my role model, and my hero. I would not be the person I am today if Bowie had not come into my life.

Posted by Heath Lowrance at 7:57 AM 7 comments: