The Philosophy of Hawthorne 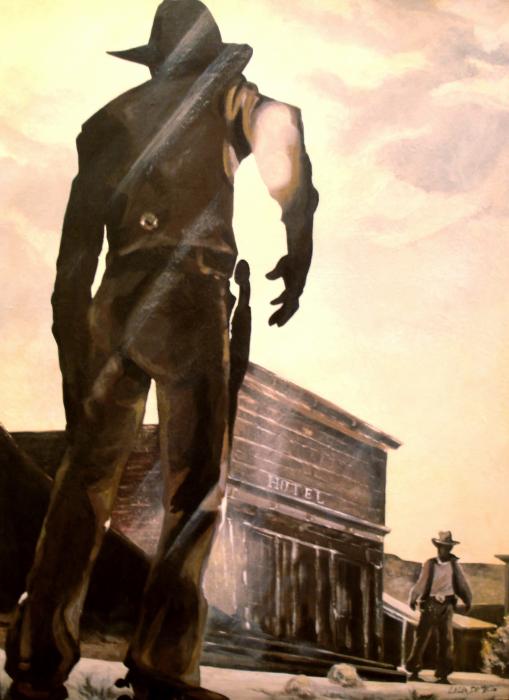 I just wrapped up the fourth Hawthorne tale, "Bad Sanctuary", in which I drop some major hints about the origin story (which is coming soon) and so have cause to think a little about the character's motivations.

I get a great deal of pleasure from writing about Hawthorne. There are things about him and the type of stories he inhabits that are immensely satisfying to me.

For those who don't know, Hawthorne is the protagonist of a series of short Weird Western stories, horror/adventure/action tales that take place in a mythological West. Hawthorne himself is a man especially suited to the world he stalks through. Some readers have assumed he's a bounty hunter-- he's not. But he IS a character driven by a dark, almost holy (or unholy) conviction. He rarely speaks. He is all action. He has no life or interests outside his bloody work. If he ever knew love in some distant past, that emotion was burned away and his heart is stone.

Or so it seems. In "Bad Sanctuary", I hint at his tragic motivations a bit, the circumstances that led him to ride the Vengeance Trail, and show that he may not be the sociopathic beast he seems to be.

For the time being, though, I'm happy to have him remain a cold, dark riddle.

So about the philosophy I adhere to while writing Hawthorne's strange adventures: it's a nihilistic one, basically. I'm no nihilist myself, but have in the past skirted along the cusp of that Dark Hole, have taken a peek or two down into the black, and I think I understand it. Hawthorne not only understands it, he inhabits it. That Dark Hole is where he lives.

He's dedicated to vengeance. Justice doesn't come into it, and neither does mercy. He doesn't think he's making a difference, but he keeps on meting out punishment (to evil both natural and supernatural) because it's what lends meaning to his existence after everything else has ceased to have meaning.

It's his singular dedication to his what he does and his complete lack of interest in anything else that make him so damn fun to write about. Hopefully, he's HALF as fun to read about.
Posted by Heath Lowrance at 12:27 PM