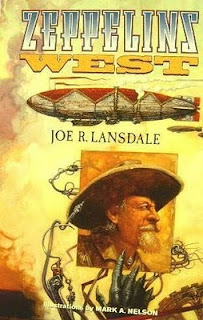 Okay, so it’s Buffalo Bill’s Wild West Show, except they’re touring the world in a fleet of zeppelins and Buffalo Bill is a head floating in a chemical-filled mason jar; sometimes they attach his head to a steam-powered robot body operated by a midget called Goober. Also along for the adventure are Wild Bill Hickok, Annie Oakley and Sitting Bull, and they’re on a secret mission to Japan to rescue Frankenstein’s Monster from an evil samurai who has been cutting off pieces of the creature to use as an aphrodisiac.

Does this have your attention yet?

Good, because it just gets weirder from there. This inspired steampunk adventure story takes our heroes from Japan to the high seas and finally to the remote island of the disgusting and evil Dr. Momo, who has nefarious plans for Buffalo Bill. Along the way, other characters—real and literary—appear in the most unusual contexts you can imagine. I really shouldn’t say anything else about it. If you can get your hands on this book (it only came out in a limited edition, I got lucky that my library had it) do yourself a favor and read it immediately. More crazy fun from the warped mind of Champion Joe.
Posted by Heath Lowrance at 4:59 PM