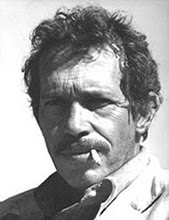 Now let's see, where were we? Oh yeah, the "essential noir" lists!

This time out I'm happy to have a terrific list from the very funny and very outspoken Jedidiah Ayres. Jed runs one of my favorite blogs, Hardboiled Wonderland, where he weighs in on crime fiction, film, popular culture, and whatever strikes him. You can find his stories in Thuglit, Plots With Guns, Crime Factory, Out of the Gutter, and well, just a bunch of places.

The above photo is NOT Jedidiah Ayres.

Jed says:
"In composing this list it became embarrassingly obvious how unqualified and under read I am to speak with any kind of authority on the matter of ‘best noirs of all time.’ All that I am qualified to do is offer an opinion based upon my subjective tastes and limited exposure to the literature we’re bestowing the ‘N’ word on. I tried not to use any too recent selections, though I can think of several that could make this list with a few more years under their belts, just because… well, damn, y’know? Handful from the last ten years in there, though. Sue me. Notable too that I didn’t include any short story collections here because then it could get really hairy for me. One more guideline: I’m tried to stick to titles I haven’t seen on the previous lists. Are some unavoidable? Probably, but here the fuck goes."

And the Ass Saw the Angel by Nick Cave The lesson that our post-Columbine, post Semptember Eleventh world just fucking refuses to learn is that our objects of scorn and abuse are likely to channel all that we heap on them into some serious fucking retribution. Euchrid Eucrow may be unlovely to begin with, but the horrors he’s witnessed and been subjected to by the people of Ukulore Valley will fuel a rage in him and a reckoning from him few will live to recount.

Berlin Noir by Philip Kerr. A three novel omnibus of Bernie Gunther stories. Gunther is an ex-SS officer turned private eye of the classic style in pre-war Berlin. The progression of the tarnished knight detective against the backdrop of the world literally going to hell is harrowing. The first two, March Violets and The Pale Criminal are pre-war and A German Requiem is post war in Vienna. By the time Bernie has seen the war and Berlin has been utterly destroyed, he is a hollowed out shell of the man he thought he was. Bernie’s small victories matter not at all in contrast to the great mad tide he has allowed to happen and the compromises he and everyone else who’s still around made just to survive. What do you know, a detective story can be noir.

Cutter and Bone by Newton Thornberg I’ve never read another book that I enjoyed so thoroughly, but had to take in such small portions. It was that heavy. I simply couldn’t bear to read it for long stretches. Shook me up. That’s all I’ll say.

The Death of Sweet Mister by Daniel Woodrell If the books of any author can be considered to be in conversation with the others, each a part of the greater whole complementing and contrasting and bringing into sharper focus the rest of the work, The Death of Sweet Mister raises the stakes for all of his Ozark tales. Ree Dolly’s quest to save her brothers from a life of blunt meanness - the driving force of Winter’s Bone. That book benefits from chronological progression.The stakes raised considerably if you’ve read Sweet Mister. Shug Akins is the sacrifice that lends additional weight to the rest of the work.

Dog Eat Dog by Eddie Bunker All the made up badassery in any of my stories becomes awfully transparent whenever I place it next to Bunker.

Farenheit 451 by Ray Bradbury I remember finishing this book that ends with the live broadcast manhunt for the hero and then turning on the television and watching O.J. Simpson’s white SUV speeding down the highway on every channel. Kinda freaked me out. Sorta stuck with me.

59 Degrees and Raining, the story of Perdita Durango a novella included in the book Sailor’s Holiday by Barry Gifford is as wild and hallucinatory a death trip as you’re ever likely to read. Its starts with prostitution, assassination and graft, quickly escalates to theft, kidnapping, human sacrifice and devil worship. When hard-bitten femme fatale Perdita Durango meets Romeo Dolorosa it’s instant, consuming lust, gravitation of badass to peer. Each feed off the other’s energy wreaking havoc throughout Louisiana, Texas California and Mexico. Thrill killers, thieves and blood lust lovers, this is give a fuck fiction at my favorite.

Fight Club by Chuck Palahniuk Ever feel like you’re wasting your life? Like you’ve got more to offer the world than your shitty retail job? Think perhaps joining an anarchist army might provide some fulfillment? Chuck’s hilarious examination of all the dead ends available is just about perfect.

Gun With Occasional Music by Jonathan Lethem. Another detective story and this one even kitschy, are you kidding? No. As playful as any of the elements of this distopia hardboiled detective genre mash up may be, and there are plenty of laughs, the sharp ness of Lethem’s wit lets him slip that satire stiletto deep before you’ve even caught on. You’ll be distracted by the talking animals and the babyheads and gimmicky schtick all the way to the end, but you probably won’t sleep very well. It’s unsettling stuff.

The Killer Inside Me by Jim Thompson Been covered, yeah?

The Mustache/The Adversary by Emmanuel Carrere Two books that I couldn’t decide between. The Mustache is a novella about a man being disconnected from reality. His increasingly frantic grasping for something solid to anchor himself to, and his absolute failure to do so, is truly frightening, (incidentally the author wrote and directed a film version of this one, but I thought it was a travesty – avoid it at least until you’ve read the book). The Adversary is a true crime account of a French med-school dropout who never told anyone that he had failed to become a doctor. He spun an elaborate deception that his wife, family, friends and neighbors were fooled by for years. When his rickety house of cards is ready to crumble, rather than come clean or own up to it all, he kills everyone he loves. Carrere interviewed the subject, Jean-Claude Romand, extensively and gets into his psyche so effectively, he robbed me of many a peaceful moment. Thank you.

No Country For Old Men by Cormac McCarthy Boiled down to its essence.

Power and the Glory by Graham Greene – is there such a thing as a redemptive noir? There is now, motherfucker. The asshole priest knows he’s doomed to die, but he’s got to decide how he’s going out and the lieutenant , a man of integrity, is doomed to hunt and slaughter (relatively) innocent men to maintain order in the land. They’re both doomed and both corrupted and compromised, but both are still in possession of some kind of sacred spark in their poorly worn souls.

Scalped by Jason Aaron & R.M. Guerra A graphic novel, and it’s not even over yet! How will the story wrap for Dashiell Badhorse and company? I don’t know, but I’ll venture… badly? Start at the start. End at the end. This is gonna be one for the ages.

Twilight by William Gay If you’ve read any of his previous novels, you’ll recognize the elements at play in this one, but Twilight has a stripped down – straight forward plot that serves to propel you through the nightmare dreamscape and mission of young Tyler to protect his sister from a monster. The preservation of a woman’s virtue may seem like small stakes to you seasoned, hardboiled readers, but considering that the woman in question is already dead and her corpse is in danger of gruesome violation makes the whole thing so twisted it’s gotta be called noir.

The Walkaway by Scott Phillips The book that gave us Wayne Ogden, an AWOL American supply sergeant and pimp, black marketer and psychopath who returns clandestinely to Kansas from occupied Japan and turns Wichita inside out. The tangential timelines follow Wayne in the fifties and Gunther Fahnstiel in the eighties, a retired policeman and the titular walkaway from a nursing home suffering from alzheimers but determined to do… something. The two story lines converge and Gunther turns out to be a worthy foil for Ogden, but damn. Wayne, Wayne, Wayne. Wayne deserves another book or two. Oh wait, they’re coming.

White Jazz by James Ellroy Hardboiled. Pitiless. Racist. Abusive. Sexually obsessed with his own sister. Corrupt. Hero. Dave Klein is a piece of work my friend. How Ellroy puts you in Klein’s corner and his own pocket so easily is astounding. And the brute force of the prose – tender as a brick.
Posted by Heath Lowrance at 6:15 AM