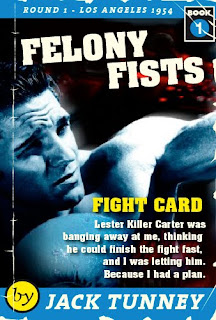 Patrick “Felony” O’Flynn is a cop in the ever-vacillating Los Angeles of the 1950’s, but his consuming passion is boxing—and he’s damn good at it. So good in fact, that his boss gives him an unusual assignment: get in the ring with crime boss Mickey Cohen’s contender and make sure he doesn’t get a shot at the title.

Simple in theory, but stopping Cohen and his fighter is going to take every bit of skill and fortitude Patrick has, and test his commitment to justice. Especially when Cohen kidnaps the 14-year-old daughter of Patrick’s trainer.

FELONY FISTS is a tight, streamlined brawler of a novel, heavy on ring action and spare jabbing prose. It’s hard not to use boxing analogies when talking about it. Series co-creator Paul Bishop is Jack Tunney this time out, and he sets a high standard for the Jack Tunneys to follow. His invocation of L.A. in the ‘50’s is vivid and well-researched without being overwhelming, and his grasp on the strange, sometimes seedy world of boxing is spot-on.

FELONY FISTS is a hugely enjoyable bout. I’m looking forward to the next round.
Posted by Heath Lowrance at 11:29 AM