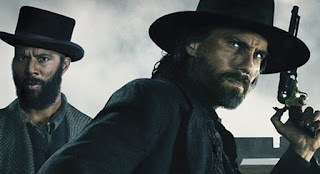 When we weren't paying attention, television actually got pretty good. Cable and basic cable have, in the last few years, bloomed with quality shows.

I don't have cable, don't want it, but I have taken advantage of DVD releases to get caught up on all the good programming happening lately. I'm still in shock that there's so much good stuff. I'm old enough to remember when TV was a huge empty wasteland of shallow, inane sit-coms and cookie cutter dramas. Yeah, there's still bad stuff out there-- I honestly despise "reality shows" with every fiber of my being-- but there are just as many good shows as bad, and that, I believe, is a first.

One such example: AMC's Hell on Wheels. Man, this show sends me.

First of all, we haven't had an ongoing Western on TV, that I know of, since Deadwood. Secondly, Hell on Wheels really, really delivers. In fact, it's better than Deadwood. I'll explain why in a moment.

The story centers initially on Cullen Bohannon, a former Confederate soldier on a mission of vengeance. He's tracking the ex-Union soldiers who murdered his wife and son, and his journey takes him to "Hell on Wheels", the mobile encampment of workers, whores, shill artists and hangers-on that follow the construction of the first transcontinental railroad. Once there, Bohannon encounters Doc Durant, the railroad tycoon obsessed with building his 40 miles of rail at all costs, Lily Bell, a widow who's husband (before being killed by Indians) was Durant's surveyor, Elam Ferguson, the former slave now trying to find his place in this new world of so-called freedom, and many other remarkably interesting characters. 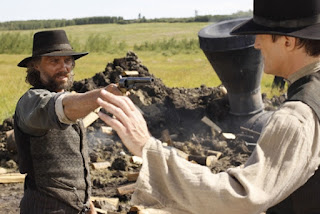 It's these characters that make the show work so well. Each one of them is clearly written, each one has his/her own agenda and their individual arcs are concise and fascinating.

This was, I think, one of the problems with Deadwood, that Hell on Wheels manages to avoid: peripheral characters that don't seem to have any real purpose. Very often on Deadwood, especially in its second season, things seemed to flounder around aimlessly. Characters were introduced that didn't have any clear motivation (or if they did, it was rather dull). Hell on Wheels, on the other hand, doesn't have any characters that feel unimportant. Everyone has a role to play, and everyone has an interesting story of their own. That simple thing can make or break a TV show.

With Deadwood, I often got the feeling that the writers were making it up as they went, without any clear idea about where they were headed. That's the kiss of death for an ongoing drama. Every episode of Hell on Wheels feels tight and fast, with a real sense of purpose. You feel like things are moving toward something huge, all the time. And as a viewer, I felt emotionally invested in every single player in this saga. 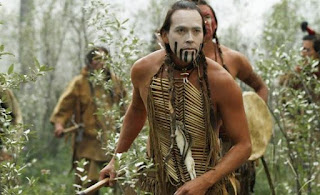 But there's more than just great character stuff in Hell on Wheels. The show also delivers on all those things that you want to see in a Western. There's plenty of action. Fisticuffs, gunfights, battles with Indians... unlike Deadwood, which seemed dead-set on not giving us any tried-and-true Western scenarios, Hell on Wheels is fairly brimming over with them. It's a show that, even though it has a very modern sensibility, is also firmly rooted in the Western tradition.

Season Two is starting pretty soon, and for the first time in a while I almost regret not having cable. I'll have to wait for the DVD release, just like The Walking Dead and Boardwalk Empire. But I guess I can wait if I have to. If it's half as good as Season One, it'll be worth the wait.