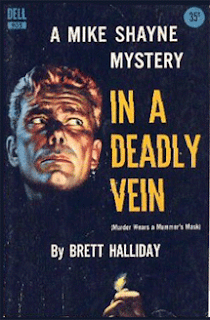 A whole slew of private detective heroes emerged in the wake of the Mickey Spillane phenomenon of the 1950’s, and even the ones who’d been around earlier enjoyed renewed success.
Brett Halliday’s series about Mike Shayne is noteworthy— first of all, there were tons of them. Halliday has been writing Shayne’s adventures all through the 1940’s, but the surge of interest in P.I. novels that came on the wake of Spillane’s success lent the series new life. While the plots were often interchangeable, they were all solid and remarkably well-written. As a character, Mike Shayne wasn’t given to too much introspection, and Halliday wasn’t big on social commentary—Shayne has been called the “generic private dick”. But for all that, the Mike Shayne novels were never boring. The movie Kiss Kiss Bang Bang was based loosely on Halliday’s novel “Bodies are Where You Find Them”.
Here’s a sampling:
Dividend on Death
Bodies are Where You Find Them
The Corpse Came Calling
Murder is My Business
She Woke to Darkness
Death Has Three Lives
Stranger in Town
Shoot the Works

In the part of town where the sun still shone, there were the light-hearted novels of Shell Scott, by Richard S. Prather. Scott was, in many ways, the ‘anti-Hammer’—funny, good-natured, and with an appreciative eye for the ladies. As a character, Shell Scott was a likeable rogue with an easy grin and a solid sense of humor, and his books are diverting and fun.
Case of the Vanishing Beauty
Everybody Had a Gun
Always Leave ‘em Dying
The Wailing Frail
Three’s a Shroud 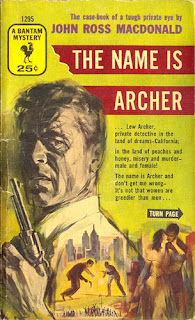 However, the most significant writer of P.I. novels to emerge in the ‘50’s (sales notwithstanding) was Ross MacDonald. His books about Lew Archer came closer than anyone before him to perfecting the sub-genre and honing it to a razor-sharp edge. He’s regarded these days as the true heir to Chandler, keeping the torch lit for the lyrical hardboiled style. As the series progressed, Archer mellowed, and so did the books. But the early adventures were tough-minded and violent, all the while maintaining a curious sense of melancholy and insightfulness. He was a more consistent writer than Chandler, and the scope of his literary concerns was just as all-encompassing.

The Dark Tunnel
Trouble Follows Me
Blue City
The Three Roads
The Moving Target
The Drowning Pool
The Way Some People Die
The Ivory Grin
Meet Me at the Morgue
Find a Victim
The Name is Archer
The Barbarous Coast
The Doomsters
So the private eye novel was riding high; that didn’t mean there weren’t readers interested in the other side of the fence. The publishers of paperback originals were ready to give ‘em what they wanted, with a whole slew of immensely talented writers who were expert at mining the materials of crime, deceit, and avarice to bring out the leanest, meanest novels imaginable.
Today, Gold Medal Books is regarded as the greatest of all the paperback original publishers, and with good reason. Others, like Dell, Ace, and Bantam, were all putting out solid noir stuff, but Gold Medal was the undisputed king of the genre, and the one most writers—and readers—of the time chose first. To give detailed bios of every single one of them would take far more room than I have here, but the stable of writers who graced Gold Medal reads like a who’s who of all-time great practicioners of the art. Here’s a brief run-down:

One of the greatest was Wade Miller, although “he” was a “they”—Robert Wade and Bill Miller. In a very short period of time, they wrote a handful of really great noirs under the “Miller” byline, and were among Gold Medal’s best-selling writers.

Steve Fisher was a writer who eventually made his way to Hollywood and started writing screenplays. Well into the 1970’s, he wrote for a variety of TV cop shows. His early novels, though hard to find now, are worth seeking out.

I Wake Up Screaming
The Hell-Black Night
Saxon’s Ghost


Charles Williams was one of a handful of writers who helped define what noir meant in the 1950’s, and is regarded now as essential. Fast-paced, stylistically dead-on, and dark, with some seriously messed-up characters.

Gil Brewer’s amazingly tragic life seemed to fuel a talent that was staggering. Recently, several different small publishers have re-discovered Brewer and put out affordable re-prints. Do yourself and favor and buy them. 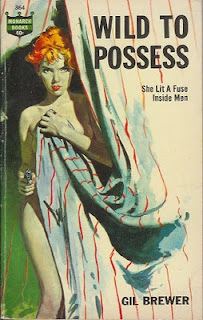 Day Keene, one of the all-time greats, this guy.
Joy House
Home is the Sailor

Lionel White’s novel Clean Break was the basis for the terrific early Kubrick movie, The Killing.

To Find a Killer
Clean Break

Later in his career, Charles Willeford would create Miami P.I. Hoke Mosley, but his early non-series novels were pure psycho noir at its bleakest, funniest, and most disturbing. Black Mass of Brother Springer, especially, is worth seeking out.

Peter Rabe: Some of his work has appeared again in recent years, thanks to Stark House and Hard Case Crime. Always unpredictable, always entertaining.

Stop This Man!
A House in Naples
Kill the Boss Goodbye
A Shroud for Jesso
Murder Me for Nickels

Robert Edmond Altar
These two by Altar are noteworthy because of their ‘strange factor’. Bizarro characters and an almost Southern Gothic flavor of psycho noir. Black Lizard reprinted them in the mid-80's. Good luck finding them now.

Dan J. Marlowe
He came to the world of writing fiction late in his life, but in a short period of time managed to hit impressive numbers—both in the number of quality books he wrote and in number of sales, usually for Gold Medal Books. “The Name of the Game is Death” is considered one of the greatest noirs of all time. 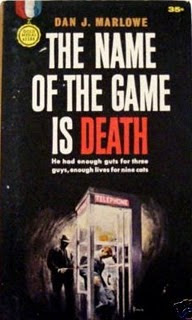 Fredric Brown is known primarily as a science-fiction writer, but in the ‘50’s he wrote a handful of very highly-regarded noirs that were experimental in nature and existential in philosophy.
The Fabulous Clipjoint
The Screaming Mimi
The Far Cry
The Lenient Beast
Here Comes a Candle

Harry Whittington
They called him the "King of the Paperbacks", and with good reason. The guy wrote something like 180 books in about ten years, almost all of them distinctive for having as a protagonist a 'decent fella' on the run and facing overwhelming odds.


Chester Himes
Hardboiled Harlem noir. Himes was the first black writer to make real headway in the genre with his tight and tough novels about Coffin Ed Johnson and Gravedigger Jones. Great stuff.

If He Hollers, Let Him Go
The End of the Primitive
The Real Cool Killers
Cotton Comes to Harlem 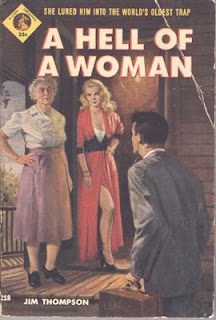 Jim Thompson is the Golden Boy of Psycho Noir. Funny and sad how he died in penniless obscurity, but is now regarded as THE writer of noir in the 1950’s; his books capture better than any one else’s the world of the sociopath faced with obstacles he’ll stop at nothing to overcome, and the inevitable spiral out of control. His novels were bleakly comedic sometimes, always weird, and even the mediocre ones were never boring.
Now and On Earth
Heed the Thunder
Nothing More Than Murder
The Killer Inside Me
Cropper’s Cabin
The Criminal
Bad Boy
The Alcoholics
A Swell-Looking Babe
The Grifters
Savage Night
Recoil
The Golden Gizmo
A Hell of a Woman
The Nothing Man
After Dark, My Sweet
The Kill-Off
The Getaway
Wild Town
Pop. 1280

John D. MacDonald is hugely important in both noir and hardboiled circles. For tightly-paced detective fiction with a very likeable hero, you can’t go wrong with any of the Travis McGee books. This list, however, focuses on his “non-series” work, all masterly-plotted and beautifully written. MacDonald was the consummate professional of noir. 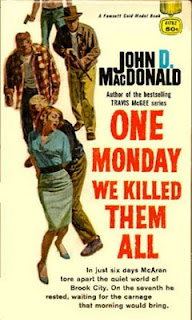 The Brass Cupcake
Murder for the Bride
Judge Me Not
Weep For Me
The Damned
Dead Low Tide
The Neon Jungle
Cancel All Our Vows
All Those Condemned
A Bullet for Cinderella
Cry Hard, Cry Fast
April Evil
Death Trap
Cape Fear (aka, The Executioners)
One Monday We Killed Them All

William P. McGivern was another one who went on to do teleplays in the ‘60’s and ‘70’s. He wrote convincingly about cops skating on the edge of moral corruption.

Ed McBain was the creator of the best-selling ‘87th Precinct’ police procedurals. The first few in the series, at least, were great examples of hardboiled, told, for a change, from the point of view of honest cops (honest cops? In hardboiled/noir fiction? You’re kidding me, right?).

The Blackboard Jungle (as Evan Hunter)
Cop Hater
The Mugger
The Pusher
The Con Man
King’s Ransom
Posted by Heath Lowrance at 8:19 AM