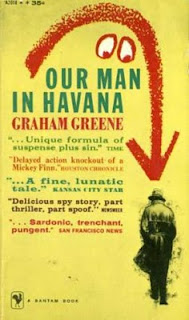 Novels of espionage aren’t always of the James Bond variety. In the post-war years and throughout the Cold War, several great writers of spy stories emerged and made their very distinctive marks on the hardboiled/noir school. Many of them were British, but it wasn’t long before the Americans got into the game as well. Here are some of the best espionage noir writers of the last fifty years:

Graham Greene’s high tension stories were excellent examples of international noir, filled with intrigue, double-crossing, and central characters in way over their heads.
Orient Express
This Gun for Hire
Confidential Agent
Ministry of Fear
The Third Man
Our Man in Havana

Eric Ambler’s work was atmospheric and tense, with protagonists that would find themselves unwittingly involved in events bigger than themselves, and struggling to get free—or at least figure out what the hell was going on.
Epitaph For a Spy
A Coffin for Dimitrios
Cause for Alarm
Journey Into Fear

John le Carre. Some readers and critics consider him as perhaps the greatest espionage novelist of all time (debatable). But le Carre did indeed write bold, cynical and compelling stories that rang with an authenticity lacking in Fleming’s work. The George Smiley cycle of novels is well worth reading, but start with these non-Smiley ventures.
The Spy Who Came in from the Cold
The Looking-Glass War

Adam Hall straddled the line between the stark realism of le Carre and the outrageous adventure of Fleming. His novels about British secret agent Quiller are fast-paced, cynical in the best noir tradition, and wildly unpredictable.

Len Deighton has been called the “anti-Fleming”, because his protagonists are so diametrically opposed to Bond. The nameless narrator of Deighton’s earliest thrillers (called ‘Harry Palmer’ in the film adaptations) is a bitter, burnt-out ex-criminal forced into working for the British government. Terrific international noir.
The Ipcress File
Funeral in Berlin
The Billion Dollar Brain

Alan Furst
Furst is every bit in the best tradition of Graham Greene and Eric Ambler, writing moody and evocative spy stories invariably set against the backdrop of WWII-era Europe. Beautifully written, fog-shrouded, and as purely noir as anything going today.


Furst is a modern writer, which leads us very nicely into the world of modern noir… next time.
Posted by Heath Lowrance at 8:54 PM