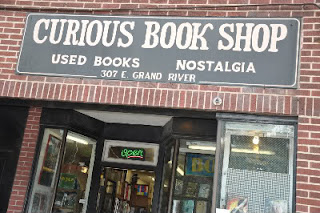 A few days ago I was moaning here at the blog about a frustrating trip to the local Barnes & Noble. It was gratifying that so many of you agree that the chain book stores (the few that remain!) are such hell-holes. And the impromptu lessons on basic economics were also appreciated, although I can assure you I already have a vague understanding of supply and demand. B&N still sucks. The supply and demand model didn’t work out so well for Borders, did it?

Anyway, since I vented my spleen about that subject already, I wanted to share something else with you—the joys that come with the exact OPPOSITE experience.

Kim and I went up to East Lansing yesterday and I had the opportunity to visit a book shop I’d been hearing about for a long time: Curious Books. They’ve been an institution in that city for many, many years and within seconds of walking in the door I found out why.

Simply put, this is the best used/rare book store I’ve ever been in.

Yes, he has a great selection of all the sorts of stuff you’d expect, but the real thrill of the place happened when I made my way down to the basement level (Curious is three stories) and found a very large space filled with tons and tons of vintage paperback originals from the likes of Gold Medal, Lion, Dell (with those cool map backs), Ace Doubles… you name it. Pricing on most of them was anywhere between 5 and 20 bucks, with most of them falling into the 10 dollar range.

They also had an enormous selection of pulp magazines—two shelves full of Argosy dating back to the ‘20’s, a slew of Ellery Queens, Alfred Hitchcocks and Mike Shaynes as early as the mid-50’s, All-Story, Dime Western, Fight Stories, Weird Tales, and on and on. It was enough to make you start hyper-ventilating.

The best thing about this place, though, was the owner, Ray. The guy knows his stuff. He knows that Jim Thompson published mostly through Lion Books. He knew that Gil Brewer was a Gold Medal writer, and had done a western. He knew the publishing history of the Doc Savage books, and the Spider, and the Shadow. He showed me a book that he and a friend had published a few years ago by Lester Dent, the guy who wrote the Doc Savage books under the name Kenneth Robeson.

When I told him I was looking for old issues of Manhunt magazine, he knew exactly what I was talking about (unlike another used store I was in some time ago, when the owner thought I was on the prod for gay culture and directed me to his small ‘man on man’ romance section).

Ray was an absolute joy to talk to, and Curious Books is hands-down my new favorite used and rare store. If you ever get out to East Lansing, you really want to check it out.

Here’s a link to their website: Curious Used and Rare.

They also have a page on Facebook you can like. I only wish there was a “love” button instead.
Posted by Heath Lowrance at 10:29 AM