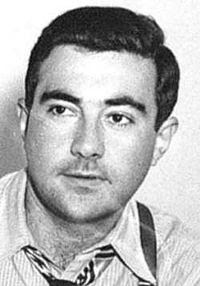 Today marks what would’ve been the, what, 95th birthday of David Goodis. Significant because, for some of us, David Goodis is THE noir writer.

His first novel, RETREAT FROM OBLIVION, came out in 1939 and the following decade found him writing steadily for the pulp magazines, for which he was amazingly prolific. In ’46, he caught a lucky break when the Saturday Evening Post serialized his DARK PASSAGE—leading to the film with Humphrey Bogart and Lauren Bacall the following year.

That led to a more-or-less unsuccessful stint as a script writer in Hollywood, where Goodis’s bizarre behavior managed to freak out even the strange creatures of Tinsel Town.

But all the titles we know him for happened after he moved back to Philly in 1950—he started writing for the paperback original houses and in relative obscurity produced classics like BLACK FRIDAY, CASSIDY’S GIRL, DOWN THERE (SHOOT THE PIANO PLAYER), THE BURGLAR, NIGHTFALL, THE MOON IN THE GUTTER, and STREET OF NO RETURN.

Goodis’ work was primarily concerned with men who had fallen from grace—which was maybe how he saw himself? It was rife with dark alienation, melancholy, and an achingly sad sense of fatalism.

He is the true Patron Saint of Noir.

So happy birthday, David Goodis, wherever you are. You were one of a kind.
Posted by Heath Lowrance at 3:37 AM