If this f***ing phone rings one more f***king time, I’m going to f***ing kill somebody 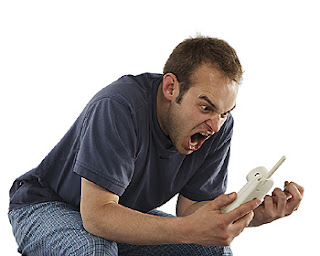 So let’s say I get up in the morning at eight, eight-thirty, something like that. First things first: I need some coffee, okay? I’m not one of those bizarre creatures who can jump out of bed and start doing stuff. In fact, those people infuriate me. Can you just shut up until I’ve pounded down some caffeine? I need a little time for the cobwebs to clear, is all I’m saying.

So while I’m having my coffee and waiting for my brain to catch up to my ass, I log on to check my e-mail and all that. This usually leads to a perusal of Facebook, then a check on the blog to see if there are any comments I need to respond to.

Then, as the coffee begins taking its effect, another quick hop over to Facebook. Oh, look, someone has posted an interesting article. Well, it won’t hurt to take a few minutes to read that.

Then, hey, that was a great article. I need to re-post it. Check my e-mail again, real quick-like. And then, you know, I should check to see if anyone has commented on my re-post.

By now an hour has gone by and I’m wide-awake.

But I’m still screwing around on line. Here’s nine o’clock. Ten o’clock. Eleven. And I realize that, once again, I’ve wasted the entire morning.

So. Log off. Get to work. Maybe I can still salvage the afternoon.

I read over the last few pages of whatever I’m working on, try to get back in the swing of the story.

This takes about an hour.

So… noon, and I make another pot of coffee, go outside for a smoke, then sit down, crack my knuckles, and… after a few minutes I have a paragraph done.

But oh yeah, I forgot, the cats need some food. Better feed them. They are grateful, of course, and I take a moment to go outside for another smoke. Then, since it’s such a nice day, I have a second one. You know, in fact it’s so nice, I’ll sit out here and write.

So I pull the laptop out on the porch and sit down. But whoops, the coffee is ready, I forgot. Go back in, get a cup. Have another smoke. Look at the computer for a while.

But I ignore the desire to go lay down for a while, and get to work. I get another paragraph done, and now, finally, it’s starting to flow.

The phone rings. I hate the phone more than anything. If I had a time machine, I’d go back and assassinate Alexander Graham Bell. Maybe after him, I’d do Hitler, but Bell is first.

I pick it up, trying to mask the annoyance in my voice. It’s a telemarketer. I’m polite. I say no thanks, and hang up.

I go back outside but now it’s raining. I have another cigarette, go inside, pour another cup of coffee, and sit on the sofa with the laptop.

I log off again, vow to myself that I will spend the rest of the afternoon writing. I won’t stop until I’ve done ten pages.

I write another paragraph. The phone rings again.

Gritting my teeth, cursing, I answer it. It’s the library, telling me the book I wanted is in. Well, I can’t be mad about that, can I? I go back to the sofa, pick up the laptop.

Cursing enough to frighten the cats into the next room, I sit back down, stare at the computer screen for a while. I re-read what I’ve done in the hopes it’ll get me back into it.

The phone rings AGAIN. I ignore it. It’s my mom. She leaves a message about the coming weekend. Okay. It’ll be nice to see her.

I start to write. My cell phone in the next room rings. I say out loud, “If this fucking phone rings one more fucking time, I’m going to kill somebody!!” But the cats, over their initial fright, don’t give a shit.
I check the caller on the cell phone. It’s my mom, leaving the same message.

I take a deep breath, pour another cup of coffee, go outside for another cigarette.

Then, back in. Start to write. It’s now almost six, and I’ve written three paragraphs.

Oh, fuck it, I say. I’ll make up the time tomorrow.

My wife gets home half an hour later. She asks me how my writing day went.